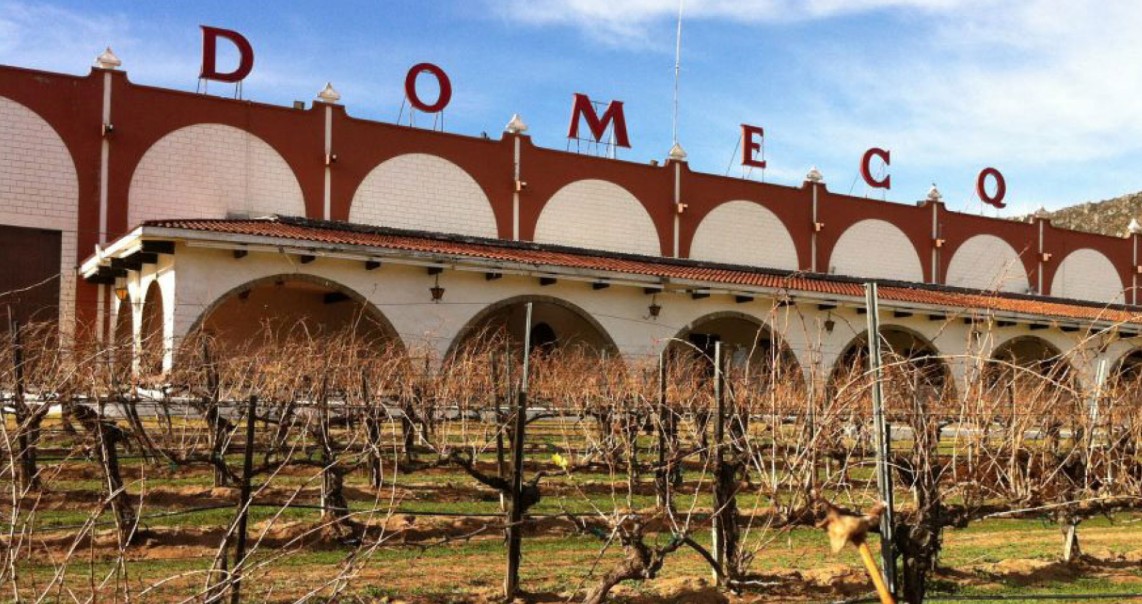 The world’s largest brandy company Emperador continues its international dominance as it takes control of the brandy market in Mexico, as the Latin American country, popularly known for ‘tequila’, sees growing preference for brandy among its liquor consumers.

Based on the latest figures released by AC Nielsen, Emperador’s subsidiary Casa Pedro Domecq, takes 57% of the brandy market share in Mexico, a country with a population of around 120 million people, which is bigger than the Philippines.

“Sales of our Presidente Brandy continue to grow. During the last 13 months, its sales grew by 8-percent becasuse of the growing demand in this market, which started since Emperador took over the company more than two years ago,” says Joan Cortes Vilardell, director, Casa Pedro Domecq.

Currently, only 4% of Emperador’s brandy sales in Mexico come from two of its imported Spanish brandy brands -  Fundador and Terry Centenario. The company sees a huge potential to further grow its sales for imported brandy in the Mexican market, particularly for Philippine-made Emperador Brandy, known to be the world’s best-selling brandy today. 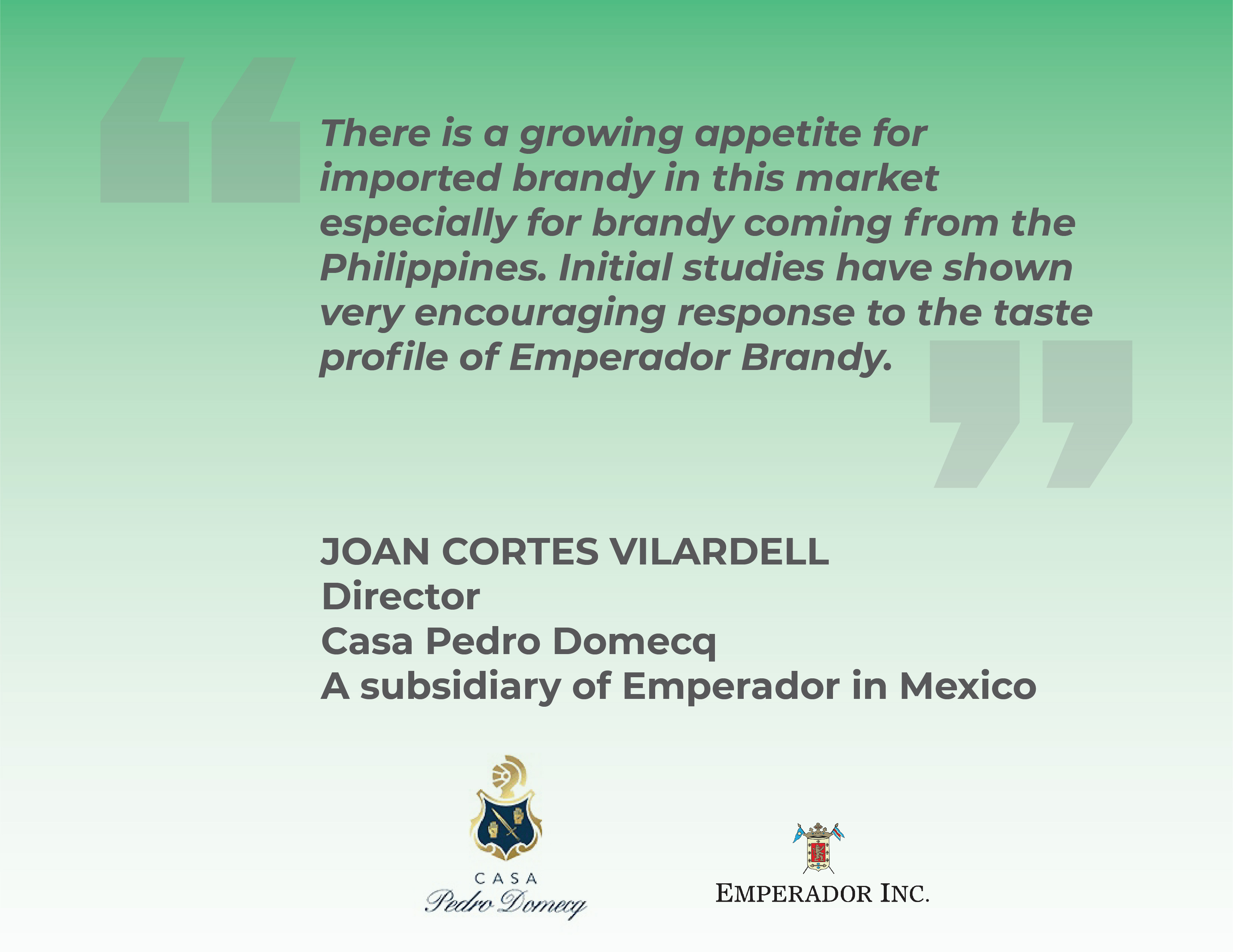 “There is a growing appetite for imported brandy in this market especially for brandy coming from the Philippines. Initial studies have shown very encouraging response to the taste profile of Emperador Brandy,” reveals Vilardell.

With this, Emperador will start exporting Emperador Brandy to Mexico and other Latin American countries next year. At present, Emperador Brandy, which is blended and bottled in the Philippines, is only widely available in North America, particularly in the United States, in this part of the world. The flagship product is also being exported to countries across Asia, Europe, Russia, and even Africa.

“We are very excited to launch Emperador Brandy in a continent where tequila is widely known. One of our top priorities in the coming years is to develop the markets in Latin America, which will be huge for Emperador’s international business, because of its combined population of around 600 million to date. This will be quite easy for us to penetrate because of Casa Pedro Domecq’s strong foothold in Mexico and across Latin America,” says Glenn Manlapaz, chief executive officer, Emperador International. 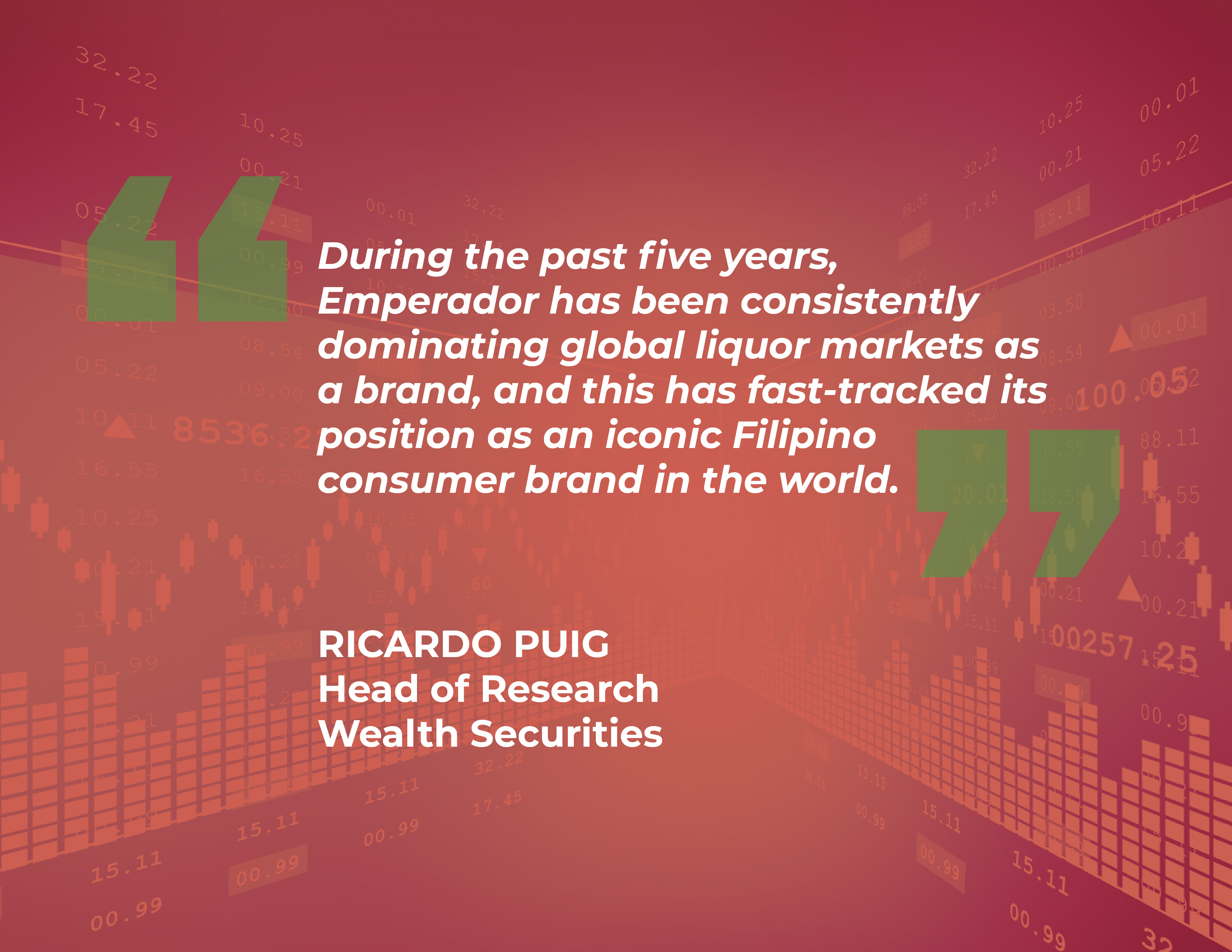 “During the past five years, Emperador has been consistently dominating global liquor markets as a brand, and this has fast-tracked its position as an iconic Filipino consumer brand in the world,” says Ricardo Puig, Head of Research, Wealth Securities.

In July, Emperador announced that its brandy and whisky businesses performed strongly in various international markets, particularly in the United States, Sweden, Spain, Indo-China, as well as in the United Kingdom, Russia, and China, during the first half of the year.